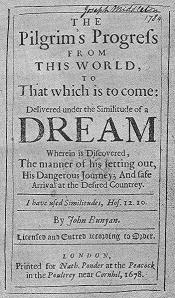 First edition of Pilgrim’s Progress by John Bunyan published in 1678.

In Little Women, Louisa May Alcott’s classic American novel about fortitude and love, Marmee gave her four daughters books as presents one Christmas. The books were copies of John Bunyan’s Pilgrim’s Progress. The March daughters had been complaining about their poverty and Marmee intended to teach a lesson of stoicism and charity through Bunyan’s work. She succeeded, and the girls gave away their breakfast to the poor on Christmas morning. This book-gift was meant to inspire, one of the functions of historical book-giving explored in this post.

Book-giving in the past and in our cultural imagination has also been used to secure interpersonal relationships. In a more light-hearted literary example, Disney’s adaptation of traditional French fairy tale, Beauty and the Beast, tells the story of bibliophile, Belle, and her relationship with a prince-turned-Beast. When the Beast is trying to win Belle’s heart, he gives her his entire library. The book as gift in this instance was meant to impress and unite. Belle is charmed, the Beast is overjoyed, and the magic talking pots and candlesticks look on happily. The movie has been described as an animated musical romantic fantasy film, but it is nonetheless exemplary of another mode of historical book-giving: that which intends to cement relationships.

Moving from America and France to England and away from the literary to reality, book-giving has to be understood in the context of book history. From the late fifteenth century in England, William Caxton’s introduction of the printing press enabled the early book trade. Printed material spread throughout the sixteenth and seventeenth centuries with the production of still-expensive books alongside cheaper, more transitory chapbooks and pamphlets, often politically inflammatory during the Civil War.

When the Licensing Act expired in 1695, publishing rates increased significantly as the number of printers was no longer limited by law. This watershed moment in the history of publishing legislation paved the way for a reading revolution in the eighteenth century. As more printed texts became available, and new education theories and practices developed, literacy rates increased.

John Milton’s complaint against the licensing order of 1643 that forbid anti-government publishing.

Book history’s focus on the book as a material object lends itself to the study of the book as a gift. In the eighteenth century, features such as binding, typography and engravings appealed to readers whose book purchases were often investments and additions to expensive collections. In a competitive market, aesthetics mattered. Books were not only valued for what they said, but for what they were.

Books were now consumer products. But they were not only valuable assets in a university or gentry house library; smaller, cheaper books could be purchased casually, read out and about or circulated amongst friends. Famously this was the age of the novel, which could be an ideal present. The eighteenth century is a significant period for book-gifting because of the explosion of printing, the growth of literacy and the development of the book as a consumer product.

Books donated by Thomas Hollis to the University of St Andrews.

Whilst varying statistics on book production, purchasing, ownership and borrowing abound in book history, numbers of books given as gifts seems an impossible quantity to determine. It is hard enough to know where books came from in an individual’s collection, let alone whether they were gifts. A starting point could be the analysis of personal inscriptions, but large-scale patterns would remain challenging at best even using this apparently quantitative method.

Case studies lend themselves best to understanding the practice of gift-giving because they consider interpersonal relationships. Personal memoirs, such as diaries and letters, are fruitful. Some gentry men and women in the eighteenth century were not only keen readers, but also keen diary-writers who obsessively recounted their own ‘stories’ and sometimes referred to their journals as their ‘books’.

One important gift-giver and diarist in this period was Thomas Hollis (1720-1774), independently wealthy distributor of books and objects. Hollis had a life mission to inform the reading public about his political viewpoint through relevant gifts to friends, politicians and cultural or educational institutions. His book donations were unprecedented. When Harvard’s library burnt down, he replenished its entire collection. Hollis was sympathetic to the parliamentary forces in the English Civil War and promoted a Whig philosophy of liberty.

Bust of Thomas Hollis, by Joseph Wilton, circa 1760

Hollis gifted many biographies, especially those of his hero: John Milton, seventeenth-century poet and parliamentary supporter. Hollis gave away John Toland’s biography of Milton repeatedly. There are at least 21 mentions of Toland’s book in Hollis’ diary between April 1759 and July 1761. When Hollis ran out of his own copies to give away, he ordered more and later financed additional print editions. Even when his printer, Millar, told him that Toland was not a big seller, Hollis did not believe it and funded further copies.[1]

The promotion of Toland is extremely significant in the understanding of Hollis’ philosophy and reading.[2] Toland has been characterised as a ‘hero of liberty’ whose work was meant to inspire the youth of the nation.[3] He was a publicist for Protestant liberties and the Hanoverian succession. Hollis gifted Toland’s work purposefully to persuade readers to adopt Toland’s political views and bring about parliamentary change in his own time.

In addition to financing publishing, Hollis chose bindings and emblems to insure that his intended message came across to the reader. The book as a gift-object was central to Hollis’ propaganda purposes. Materiality mattered as much as content at a time when physical books shaped England’s literary landscape. Book-giving for Hollis in the eighteenth century, as in the case of Marmee’s gift of Pilgrim’s Progress, was persuasive in all elements, intended to convince and inspire the receiver and reader.

Historical book-giving in the long and bookish eighteenth-century could also solidify interpersonal relationships. Anne Lister (1791-1840), famously characterised as the ‘first modern lesbian’, gave specific books in her attempts to woo potential lovers.[4] She used the powerful tool of allusion to convey taboo intentions. Lister considered giving Lord Byron’s tale of chivalric pilgrimage, Childe Harold, to the young Miss Browne as a gift. Scholars have argued that this work was the first literary example of the ‘Byronic hero’ who was aristocratic and sexually frustrated in his own country. Readers have read the work as a ‘rough draft’ for ‘Don Juan’s more subversive, gay narrator’.[5]

Lister wrote in her diary that Miss Browne, ‘Inquired for the 5th canto of “Childe Harold”’. She continued, ‘It is not in the library & I have been thinking ever since (for somehow or other, this girl haunts my thoughts like some genius of fairy lore) how to get it & offer it for her reading’.[6] The desire to obtain the story of Childe Harold, a seducer of women, and give it to Miss Browne was Lister’s way of sharing a forbidden passion to awaken Miss Browne to the possibilities of a love affair with Lister.

Living in the early nineteenth century, Lister deployed book-gifts embedded in the literary movement of Romanticism. She alluded to Romantic themes in literature to convey meaning. Interestingly, and not surprisingly, both Hollis and Lister referred to contemporary cultural reference points to inspire or unite. For Hollis it was seventeenth-century Civil War politics and for Lister it was early nineteenth-century literary Romanticism.

Marcel Mauss and Natalie Zemon Davis have studied the idea of ‘the gift’ in different historical periods, both taking a more anthropological approach than that used here. For each, gift-giving was a force of reciprocity and exchange that united different communities.[7] Gifts were given so that subsequent gifts would be returned. Whilst this was indeed a function of gift-giving in the past, I would suggest here that book-gifting in the eighteenth century can be also understood on a micro-level in which individuals gave carefully-chosen consumer books, containing contemporary examples and allusions, to communicate specific ideas and feelings to those around them. Whether or not the givers were successful in their aims is a different story.

Reading together: Anna Madeley as Marianna Lawton and Maxine Peake as Anne Lister in BBC 2 dramatisation, ‘The Secret Diaries of Miss Anne Lister’